Well, I haven't posted in a long time, so I thought I'd drop an article.

I don't want to get into the whole believer, agnostic, athiest argument. Either one believes in a god, or one doesn't. I might be wrong, but I do think with a measure of certainty, that I'm more right than people who believe in god. Especially a personal god.

It's funny, I've made this decision this week and I feel like a "rush to judgment", but I want to be firm in what I believe.

It's actually exciting because I know common sense and science aligns with my belief. And since I'm only 5% of the population, it'll be 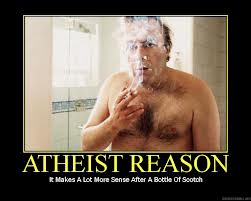 fun to fuck with people's belief/culture system.
No comments: