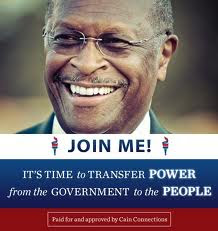 It seems so long ago Mr Cain was in the presidential race. In fact, wasn't he leading the polls in Florida at one time?

But it also appears, like a lot of men, Mr Cain had one big problem--keeping his dick in his pants. And because of that, we lost the greatest hope going for conservative Americans.

BTAIM, many many millions of conservatives are again led to vote while holding their noses. I know I, as a conservative, am getting damned pissed off about it. I really liked Herman Cain, and I was excited about his presidency. A dear friend of mine, a Jewish woman, was equally excited.

Now I believe most conservatives hold the view of ABO, anybody but Obama. But it's not going to be easy. Take away the Looney Liberals, majority of minorities, people sucking from the government teat, unions, and Main Steam Media, there may not be enough clear thinking Americans to stem this tide.

And woe is us if Barack Obama is president of these United States another 4 years.