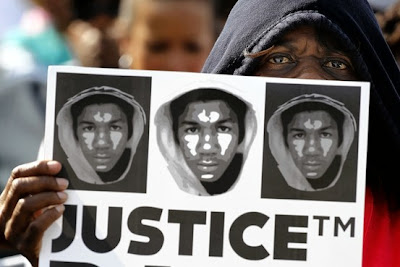 Two tragedies are apparent in the Trayvon Martin case. The first is obvious: A teenager—unarmed and committing no crime—was shot dead. Dressed in a "hoodie," a costume of menace, he crossed paths with a man on the hunt for precisely such clichés of menace. Added to this—and here is the rub—was the fact of his dark skin.

Maybe it was more the hood than the dark skin, but who could argue that the skin did not enhance the menace of the hood at night and in the eyes of someone watching for crime. (Fifty-five percent of all federal prisoners are black though we are only 12% of the population.) Would Trayvon be alive today had he been walking home—Skittles and ice tea in hand—wearing a polo shirt with an alligator logo? Possibly. And does this make the ugly point that dark skin late at night needs to have its menace softened by some show of Waspy Americana? Possibly.

What is fundamentally tragic here is that these two young males first encountered each other as provocations. Males are males, and threat often evokes a narcissistic anger that skips right past reason and into a will to annihilate: "I will take you out!" There was a terrible fight. Trayvon apparently got the drop on George Zimmerman, but ultimately the man with the gun prevailed. Annihilation was achieved.

If this was all there was to it, the Trayvon/Zimmerman story would be no more than a cautionary tale, yet another admonition against the hair-trigger male ego. But this story brought reaction from the White House: "If I had a son he would look like Trayvon," said the president. The Revs. Jesse Jackson and Al Sharpton, ubiquitous icons of black protest, virtually battled each other to stand at the bereaved family's side—Mr. Jackson, in a moment of inadvertent honesty, saying, "There is power in blood . . . we must turn a moment into a movement." And then there was the spectacle of black Democrats in Congress holding hearings on racial profiling with Trayvon's parents featured as celebrities.

In fact Trayvon's sad fate clearly sent a quiver of perverse happiness all across America's civil rights establishment, and throughout the mainstream media as well. His death was vindication of the "poetic truth" that these establishments live by. Poetic truth is like poetic license where one breaks grammatical rules for effect. Better to break the rule than lose the effect. Poetic truth lies just a little; it bends the actual truth in order to highlight what it believes is a larger and more important truth.

The civil rights community and the liberal media live by the poetic truth that America is still a reflexively racist society, and that this remains the great barrier to black equality. But this "truth" has a lot of lie in it. America has greatly evolved since the 1960s. There are no longer any respectable advocates of racial segregation. And blacks today are nine times more likely to be killed by other blacks than by whites.

Zuma Press
If Trayvon Martin was a victim of white racism (hard to conceive since the shooter is apparently Hispanic), his murder would be an anomaly, not a commonplace. It would be a bizarre exception to the way so many young black males are murdered today. If there must be a generalization in all this—a call "to turn the moment into a movement"—it would have to be a movement against blacks who kill other blacks. The absurdity of Messrs. Jackson and Sharpton is that they want to make a movement out of an anomaly. Black teenagers today are afraid of other black teenagers, not whites.

So the idea that Trayvon Martin is today's Emmett Till, as the Rev. Jackson has said, suggests nothing less than a stubborn nostalgia for America's racist past. In that bygone era civil rights leaders and white liberals stood on the highest moral ground. They literally knew themselves—given their genuine longing to see racism overcome—as historically transformative people. If the world resisted them, as it surely did, it only made them larger than life.

It was a time when standing on the side of the good required true selflessness and so it ennobled people. And this chance to ennoble oneself through a courageous moral stand is what so many blacks and white liberals miss today—now that white racism is such a defeated idea. There is a nostalgia for that time when posture alone ennobled. So today even the hint of old-fashioned raw racism excites with its potential for ennoblement.

For the Revs. Jackson and Sharpton, for the increasingly redundant civil rights establishment, for liberal blacks and the broader American left, the poetic truth that white racism is somehow the real culprit in this tragedy is redemption itself. The reason Al Sharpton and Jesse Jackson have become such disreputable figures on our cultural landscape is that they are such quick purveyors of poetic truth rather than literal truth.

The great trick of poetic truth is to pass itself off as the deep and essential truth so that hard facts that refute it must be dismissed in the name of truth. O.J. Simpson was innocent by the poetic truth that the justice system is stacked against blacks. Trayvon was a victim of racist stereotyping—though the shooter never mentioned his race until asked to do so.

There is now a long litany of racial dust-ups—from Tawana Brawley to the Duke University lacrosse players to the white Cambridge police officer who arrested Harvard professor Skip Gates a summer ago—in which the poetic truth of white racism and black victimization is invoked so that the actual truth becomes dismissible as yet more racism.

And this points to the second tragedy that Trayvon's sad demise highlights. Before the 1960s the black American identity (though no one ever used the word) was based on our common humanity, on the idea that race was always an artificial and exploitive division between people. After the '60s—in a society guilty for its long abuse of us—we took our historical victimization as the central theme of our group identity. We could not have made a worse mistake.

It has given us a generation of ambulance-chasing leaders, and the illusion that our greatest power lies in the manipulation of white guilt. The tragedy surrounding Trayvon's death is not in the possibility that it might have something to do with white racism; the tragedy is in the lustfulness with which so many black leaders, in conjunction with the media, have leapt to exploit his demise for their own power.

Mr. Steele is a senior fellow at Stanford University's Hoover Institution. Among his books is "White Guilt" (Harper/Collins, 2007).