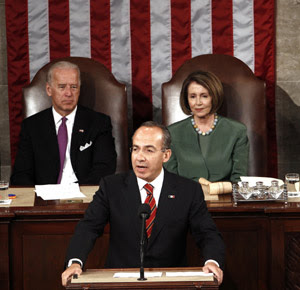 Not only do the Democrats fail to figuratively stand up for America, but they literally stand up for and applaud those who seek to condemn it. Worse, it is condemnation from the foreign leader whose own country is a primary source of our illegal immigration issues.

This is our congress of the US? Shame, shame on us.

This, from Michael Costello:

Migrants on the Move in Mexico” details the abuse faced by Central American migrants, who cross the southern border between Guatemala and Mexico, usually en route to the US.Each year, tens of thousands of migrants make the trip.

Many lose limbs from accidents on trains they board to head northward. Women and girls report sexual violence. And - far worse than asking suspected illegal immigrants about their US immigration status, as the new Arizona law will require police to do - many Central American migrants to Mexico accuse Mexican officials of demanding bribes or flat-out stealing their cash.
"Migrants in Mexico are facing a major human rights crisis leaving them with virtually no access to justice, fearing reprisals and deportation if they complain of abuses," Rupert Knox, Mexico Researcher at Amnesty International, said. "Persistent failure by the authorities to tackle abuses carried out against irregular migrants has made their journey through Mexico one of the most dangerous in the world."

Lately, as drug violence has soared, migrants have also been increasingly the victims of kidnapping.

Email ThisBlogThis!Share to TwitterShare to FacebookShare to Pinterest
Labels: Calderon