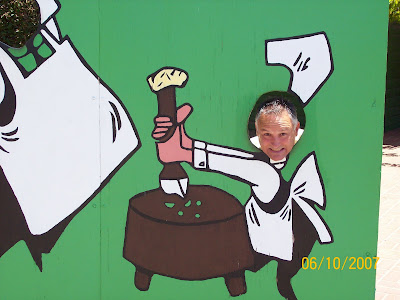 The fiscal equivalent of Stockholm Syndrome:

A term used to describe a paradoxical psychological phenomenon wherein government officials express adulation and have positive feelings toward unsustainable union contracts that appear irrational in light of the danger or risk posed by such contracts to the government.

Our politicians are hostages, they just don't know it. Hence, our federal jobs policy is geared towards subsidizing unsustainable state and local union contracts which states and local governments cannot afford:

Despite President Obama's pledge for honest budgeting and billions of dollars in stimulus money spent to save teachers' jobs, the Education Department is asking for off-the-books emergency funding to keep local districts from laying off school teachers next school year.

Education Secretary Arne Duncan sent Democratic lawmakers a request Thursday to pass a $26 billion emergency supplemental to fund up to 300,000 teachers' jobs that he says will otherwise be lost in the fall.

It never ends. When do we get to stop subsidizing jobs we "saved or created"?

This is nothing more than a subsidy to teachers' unions to put off the hard fiscal decisions which must be made in order to put state and local budgets on a self-sustaining basis.

In many, if not most, of these school districts, the teachers' unions have rejected compromises which could have saved these jobs without federal subsidies, but would have required modifications to benefits which are unaffordable.

I have documented this problem in Rhode Island in numerous posts.

Once again, I have been proven right about the charade we call "jobs saved or created" under the Stimulus Plan.

Here's my prior analysis from February, commemorating the one-year anniversary of the Stimulus Plan), One Year Ago I Saved The Economy:

....[a]t most, we had subsidies to state governments to perpetuate completely unsustainable budgets drowning in union-related labor costs and pensions, and infrastructure projects notorious for cost overruns. No jobs were created or saved; unless of course the federal government is going to continue to subsidize these jobs indefinitely.

And it has come to pass.

Forcing state and local governments to get their fiscal acts together is not anti-teacher or even anti-union. The current system is a house of cards which will collapse unless serious reforms are enacted. Delaying those reforms through federal subsidies treats the symptom, but not the disease.

The Obama administration is suffering from Greece Syndrome. The end will not be pretty. It will be local bankruptcies, broken promises to retirees, and social unrest.

Update: Here is an excerpt from a reader letter at Powerline blog about Chris Christie's attempt to restore fiscal sanity in New Jersey.:

I think you have to have lived in NJ for a while to really appreciate what Christie is trying to do. You might be surprised to learn that there are four branches of government in NJ: executive, legislative, judicial, and NJEA (NJ Education Association -- the teachers' union). Of the four, the last one is the most powerful. Never in the 30 years that I have been here has anyone had the cojones to face off with the NJEA.
For more