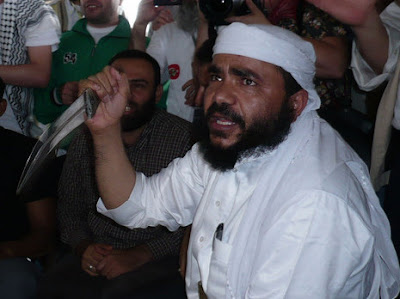 What would happen if the Arabs laid down their weapons against Israel?
No more bloodshed.

What would happen if Israel laid down its weapons protecting themselves against the Arabs?
Israel would be slaughtered. Men, women, boys, girls, babies. Every last one of them. And the murdering stupid idiots think they would be doing it in the name of Allah.

I think I'm now understanding what is political correctness. It's not what is right. It's what pleases the majority.

I'm watching CNN and the reporter is showing video footage of the Jewish soldiers being attacked upon landing on the boat. While the footage is being shown, she says, "We have to find out what happened". In other words, I have to find out what the group think is, so I can then report the "truth".

Of course there are the usual demonstrations around the world from these mohammedian assholes. Geez, who would have thought that would happen. I'd like to be in their circle of discussion. I'm sure stories are circulating that each one of the "peace activists" killed at least 5 Jews with their bare hands.

If there was no video that was made public immediately, what do you think would have been the "real truth" told by these lying bastards?

All that makes them happy is their hatred and misery. Why don't you Arabs, if you're so magnanimous, give Palestine a state? No, can't do that. It's more fun to hate and kill people.

One more thing: How do feel now, my dear Jewish friends, who voted for Obama? I'm sure he stands behind Israel, don't you? And I'm sure that these violent demonstrations that will come in the US will be soundly denounced by "The One".