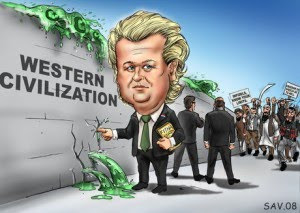 One can always count on the New York Times to be biased and boringly predicable — traits which have rendered it to be the one thing it must dread becoming: irrelevant.

The Times article on the recent Dutch elections does not disappoint. Dutch elections would normally not garner even a back page passing reference, but when candidate Geert Wilders finishes a strong third place, doubling Party of Freedom parliamentary count to 24 seats, the world, and the Times, pays attention.Readers of NewsReal Blog and FrontPage know Wilder’s story well and we know reflexively that the Times will regurgitate the usual drivel in describing Wilders. Anti everything, extremist, far-right, and the inevitable linking to a neo Nazis such as the late Austrian politician Jorg Haider. (Can these Times reporters even try to be original anymore?)

Even the Times, however, can trip on itself; interesting nuggets can slip through the sensors that allow for amazing candidness and clear thought, even if by happenstance.

The Times calls on a Dutch academic to enlighten us to one of the secrets of Wilder’s success:

Dick Houtman, a professor of political sociology at Erasmus University in Rotterdam, said that Mr. Wilders had built on Mr. Fortuyn’s legacy, successfully avoiding the overtly racist language of far-right politicians in other countries by highlighting issues like freedom of speech, female equality and gay rights. “That serves to exclude Muslims from the Dutch political consensus,” he said. (emphasis mine)

Maybe this statement is too obvious for the Times to pick up on. But read it again. By being in favor of freedom of speech, female equality, and gay rights, Wilders serves to exclude Muslims from the Dutch political consensus! How dare he? Extreme indeed! Apparently to be part of the postmodern Western “political consensus”, too be inclusive of Muslims, we need to be against freedom of speech, gay rights and female equality?

Houtman, aware of it or not, has made a brilliant, if obvious, observation. In order for many Muslim immigrants to feel culturally and politically included in the West, most clearly in Holland, they need to exist in an environment that is not open to the pluralistic, open and free West of the Enlightenment of the past 300 years.

So when a Western politician like Wilders openly embraces the values of liberty, he is called an extremist, hate monger and radical with ties to neo Nazis. The elite class, currently in Washington and throughout the halls of Western academia and the media, feel it more important to be inclusive of Muslims then holding true to the values that created the most open and free society the world has ever seen. And to oppose this new orthodoxy makes one a criminal, as the Left hopes to make of Wilders.

We can thank the Times for offering some clarity on this issue. Who would have thunk it.

Sometimes I don't know whether to laugh or get angry. But I like when