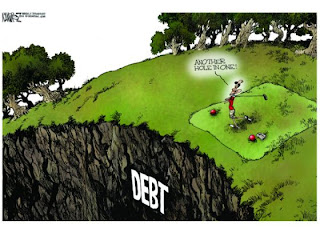 In the course of a typical day I usually receive at least a couple of emails from readers lamenting that America is now the Titanic. This is grossly unfair to the Titanic, a state-of-the-art ship whose problem was that it only had lifeboat space for about half its passengers. By contrast, the SS Spendaholic is a rusting hulk encrusted with barnacles, there are no lifeboats, and the ship’s officers are locked in a debate about whether to use a thimble or an eggcup.

A second downgrade is now inevitable. Aw, so what? We had the first back in the summer, and the ceiling didn’t fall in, did it? And everyone knows those ratings agencies are a racket, right? And say what you like about our rotten finances, but Greece’s are worse. And Italy’s. And, er, Zimbabwe’s. Probably.

The advantage the United States enjoys is that, unlike Greece, it can print the currency in which its debt is denominated. But, even so, it still needs someone to buy it. The failure of Germany’s bond auction on Wednesday suggests that the world is running out of buyers for western sovereign debt at historically low interest rates. And, were interest rates to return to their 1990-2010 average (5.7 percent), debt service alone would consume about 40 percent of federal revenues by mid-decade. That’s not paying down the debt, but just staying current on the interest payments.

And yet, when it comes to spending and stimulus and entitlements and agencies and regulations and bureaucrats, “more, more, more/how do you like it?” remains the way to bet. Will a Republican president make a difference to this grim trajectory? I would doubt it. Unless the public conversation shifts significantly, neither President Romney nor President Insert-Name-Of-This-Week’s-UnRomney-Here will have a mandate for the measures necessary to save the republic.