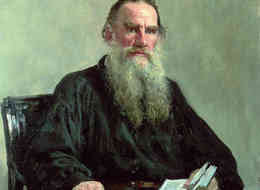 Not long ago I had a talk with a retired soldier, a butcher, and he was surprised at my assertion that it was a pity to kill, and said the usual things about it's being ordained. But afterwards he agreed with me: `Especially when they are quiet, tame cattle. They come, poor things! trusting you. It is very pitiful.'
This is dreadful! Not the suffering and death of the animals, but that a man suppresses in himself, unnecessarily, the highest spiritual capacity -- that of sympathy and pity towards living creatures like himself -- and by violating his own feelings becomes cruel. And how deeply seated in the human heart is the injunction not to take life!
Once, when walking from Moscow, I was offered a lift by some carters who were going to Serpukhov to a neighbouring forest to fetch wood. It was Thursday before Easter. I was seated in the first cart with a strong, red, coarse cartman, who evidently drank. On entering a village we saw a well-fed, naked, pink pig being dragged out of the first yard to be slaughtered. It squealed in a dreadful voice, resembling the shriek of a man. Just as we were passing they began to kill it. A man gashed its throat with a knife. The pig squealed still more loudly and piercingly, broke away from the men, and ran off covered with blood.
Being near-sighted I did not see all the details. I saw only the human-looking pink body of the pig and heard its desperate squeal, but the carter saw all the details and watched closely. They caught the pig, knocked it down, and finished cutting its throat. When its squeals ceased the carter sighed heavily. `Do men really not have to answer for such things?' he said.
So strong is humanity's aversion to all killing. But by example, by encouraging greediness, by the assertion that God has allowed it, and above all by habit, people entirely lose this natural feeling.
I only wish to say that for a good life a certain order of good actions is indispensable; that if a man's aspirations toward right living be serious they will inevitably follow one definite sequence; and that in this sequence the first virtue a man will strive after will be self-control, self-restraint. And in seeking for self-control a man will inevitably follow one definite sequence, and it this sequence the first thing will be self-control of food. And if he be really and seriously seeking to live a good life, the first thing from which he will abstain will always be the use of animal food, because, to say nothing of the excitation of the passions caused by such food, its use is simply immoral, as it involves the performance of an act which is contrary to moral feeling -- killing.
"But why, if the wrongfulness of animal food was known to humanity so long ago, have people not yet come to acknowledge this law?" will be asked by those who are accustomed to be led by public opinion rather by reason. The answer to this question is that the moral progress of humanity -- which is the foundation of every other kind of progress -- is always slow; but that the sign of true, not casual, progress is its uninterruptedness and its continual acceleration.
And the progress of vegetarianism is of this kind. That progress is expressed in the actual life of mankind, which from many causes is involuntarily passing more and more from carnivorous habits to vegetable food, and is also deliberately following the same path in a movement which shows evident strength, and which is growing larger and larger -- viz. vegetarianism. That movement has during the last ten years advanced more and more rapidly. More and more books and periodicals on this subject appear every year; one meets more and more people who have given up meat; and abroad, especially Germany, England, and America, the number of vegetarian hotels and restaurants increases year by year.
This movement should cause special joy to those whose life lies in the effort to bring about the kingdom of God on earth, not because vegetarianism is in itself an important step towards that kingdom (all true steps are both important and unimportant), but because it is a sign that the aspiration of mankind towards moral perfection is serious and sincere, for it has taken the one unalterable order of succession natural to it, beginning with the first step.
One cannot fail to rejoice at this, as people could not fail to rejoice who, after striving to reach the upper story of a house by trying vainly and at random to climb the walls from different points, should at last assemble at the first step of the staircase and crowd towards it, convinced that there can be no way up except by mounting this first step of stairs.