Get Ready For Lots Of Housing

2010 saw a record number of bank repossessions, over a million, even with a big drop in volume toward the end of the year, thanks to the robo-signing scandal and ensuing foreclosure freezes.

"Early indications in January were that this robo-signing related delay will be over by the end of first quarter if not sooner," says RealtyTrac's Rick Sharga. "I think we're going to see a significant spike in foreclosure activity early in 2011, and that will contribute in part to 2011 being a record year."

Sharga estimates as many as a quarter of a million foreclosures that should have happened in 2010 will now be pushed into the 2011 numbers, and added to an already huge supply of bank owned properties. The four biggest banks already have close to $7 billion worth of foreclosed properties (REO) on their books, and Fannie and Freddie have about $24 billion collectively. While REO sales make up about one third of all sales in the current market, there is an estimated 3 year supply. 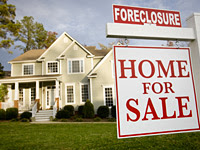