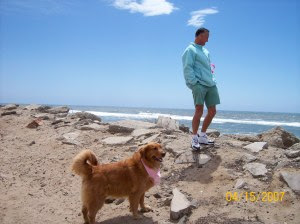 I enjoy hopping on the LA Metro and just going. Where, I don't know. But it's fun to see the sights, hear the sounds and taste the foods. LA really is a great city. An all day boarding pass is $6. That includes all the trains and buses in the LA area. You can't beat that price.

Yesterday, I started at the Norwalk station, just off the 605 freeway. Parking is free. From there I took the metro to the Pico station. I wanted to walk around the Convention Center and Staples Center, they're adjacent to each other.

Then I walked down Pico to the garment district. It's a bit unusual in that while I'm walking on Pico, I'm the only one around that is walking. Then once I cross this one street, in which I now enter the garment district, it suddenly becomes bustling with thousands of people.

In the garment district I walk down Santee Alley. Think Avenue De Revolution in Tijuana on steroids.

From there, I strolled down Broadway, through the Jewelry District, hop back on the metro to Union station. Union station is an interesting stop. The subway lets you off underground. Then go up one flight of stairs and there seems to be literally a hundred different portals taking you to different destinations. But go one more flight of stairs, and you reach the Gold line, which again gives you a completely different view. It's hard to believe in one minute I'm completely underground, the next I'm where all the trains go, and then I'm on the Gold line looking out over the city. The Gold line metro will take you to East LA in one direction, and Pasadena the other.

So I'm at the Gold rail station waiting for the subway. Which way will I go? Depends who comes first. That's the fun of taking the subway, having no plans and just letting the day unfold as you choose. The subway that came first was bound for Pasadena. I asked what would be the best stop to see the sights. I was told "Memorial Park station". Perfect. I got off, walked to Colorado Ave, and in a few minutes I'm walking Old Town Pasadena.

From there, I got back on and went to East LA. I got off at Mariachi Square. I heard that the mariachis are hanging out waiting for gigs. Sure enough, as I exit the station, there's a bunch of mariachis in their garb hanging around.

Getting a bit tired, I hopped back on the metro, stopping at Macy's for some Chinese food. Time to go home. But I got to talking with one passenger and missed my stop. I told him, "See, because you were talking to me, I missed my stop". He said, "Don't go blaming you missing your stop on me".

It was a good day.