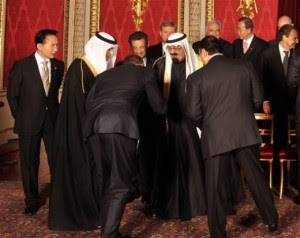 Events are unfolding, but they have not yet run their course; things are still continuing to cascade.  If the unrest spreads to the point where the Suez and regional oil fall into anti-Western hands, the consequences would be incalculable.  The scale of the left’s folly: their insistence on drilling moratoriums, opposition to nuclear power, support of  negotiations with dictators at all costs, calls for unilateral disarmament, addiction to debt and their barely disguised virulent anti-Semitism should be too manifest to deny.

Because it will hit them where it hurts, in the lifestyle they somehow thought came from some permanent Western prosperity that was beyond the power of their fecklessness to destroy. It will be interesting to see if anyone can fill up their cars with carbon credits when oil the tankers stop coming or when black gold is marked at $500 a barrel. It is even possible that within a relatively short time the only government left friendly to Washington in the Middle East may be Iraq. There is some irony in that, but it is unlikely to be appreciated.

The Left is always correct and when it is not, they will simply rewrite history. “Oceania has always been at war with Eastasia. War is peace. Freedom is slavery. Ignorance is strength.” As the former Eastern Europeans  said when they read Orwell, “how did he know? How did he know?”