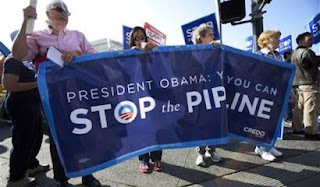 This week President Obama handed down what may prove to be one of the most fateful decisions of his entire administration when he rejected the plan to build the Keystone XL Pipeline carrying oil from the tar sands of Canada to the refineries of Houston. The decision did not win him one new vote but was crucial in protecting his environmental flank. The movie stars and Sierra Club contributors were getting restless and had drawn the line in the sand.
In turning down Keystone, however, the President has uncovered an ugly little secret that has always lurked beneath the surface of environmentalism. Its basic appeal is to the affluent. Despite all the professions of being "liberal" and "against big business," environmentalism's main appeal is that it promises to slow the progress of industrial progress. People who are already comfortable with the present state of affairs -- who are established in the environment, so to speak -- are happy to go along with this. It is not that they have any greater insight into the mysteries and workings of nature. They are happier with the way things are. In fact, environmentalism works to their advantage. The main danger to the affluent is not that they will be denied from improving their estate but that too many other people will achieve what they already have. As the Forest Service used to say, the person who built his mountain cabin last year is an environmentalist. The person who wants to build one this year is a developer.