My Uncle Ken and Aunt Ouis 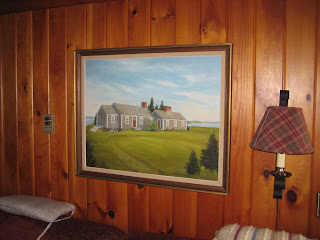 I just got back from New Hampshire. My wife, dog and I had a wonderful time.

One of the highlights of the trip was spending time with my Uncle Ken and Aunt Ouis.

My Aunt is (well, I won't tell you how old she is), but easily could pass for a woman 20 years her junior. She really is one beautiful woman.

My Uncle Ken is 83 and even though he's had a stroke and moves slow, he still plays golf and has a great sense of humor. Boy, does that guy crack me up.

They live in a home with a bedroom on each side of the house. And they sleep in separate rooms. I asked my Uncle if he ever sneaks to the other side of the house at night for some hanky panky. (One of the things you must know, is that when you have a stroke, one of the side effects is memory loss, from which my Uncle suffers). So when I asked Uncle Ken that question, his response was "Yes, but by the time I get over there, I forget what I went for".

And Uncle Ken still plays golf. But with his stroke he can't use his left side to hit the ball, so he's lost power and distance off the tee. So he hits from what are called the Super Senior tees, AKA, the Lady's tees. Well, we were playing with his son and grandson, and us 3 would hit the ball from the regular tees. After Uncle Ken hit, I would drive him up to his ball. If his ball was ever past his son's, he would say "Good drive Brad, you almost made it up to me".

So you can see he has a wonderful sense of humor. My wife adores them both. We had a great time being with them and their generosity was refreshing.