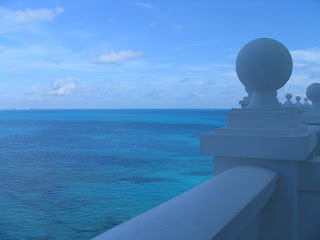 So Ted and I are sitting in a Mexican bar/restaurant along the ocean. Pounding down a few cervezas, listening to the Mariachies, in the cool Cancun breezes.

“See that mothafucka there”. “Yeah, what about it?”, I said. Ted says, “I hate those mothafuckas, they’re idiots”.

OK Ted, whatever. Jesus, I’m just trying to enjoy my beer, and this redneck starts all this hate bullshit. Shut the fuck up, let’s just drink our beer and catch a little buzz.

The muslim dude is eating dinner with his wife. I guess that’s his wife, it’s hard to see what’s behind with the get-up she’s wearing. There’s only a slit for her eyes in the whole goddamned outfit. She does have nice eyes though.

Anyway, as they are chomping down on their “Tacos al Puerco”, the night’s special, Ted starts laughing at the couple as they eat. I tell Ted that it’s rude, but he keeps on laughing. Honestly though, it was funny watching the girl stick her fork through the eyehole and fish it to her mouth. It was quite an art. I didn’t see anything spill on her outfit. Or maybe, because it was all black, it just blended.

The cervezas started getting to Ted. “I don’t know what she looks like, but she sure has some purty eyes”. He winked at her. Uh oh, she winked back.

The devout muslim man, realizing his name had been dishonored, reacted. He began cleaning the knives he was eating with, for want of defiling his woman. He then proceeded to gouge out her eyes with said utensils.

“That’s just horrible,” said Ted. Ted though, being a redneck, had become sophisticated living in the big city. “You’ve got to accept their ways, that’s multiculturalism”.

For good measure, Ahab then slashed his wife’s throat. Not before asking if she was going to eat her pate.

Email ThisBlogThis!Share to TwitterShare to FacebookShare to Pinterest
Labels: Redneck