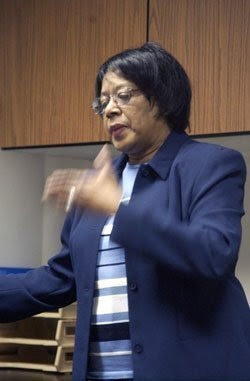 This is Anne Wortham. She is Associate Professor of Sociology at Illinois State University
and continuing Visiting Scholar at Stanford University 's Hoover Institution.

She has been a John M. Olin Foundation Faculty Fellow, and honored as a Distinguished Alumni of the Year by the National Association for Equal Opportunity in Higher Education.

In fall 1988 she was one of a select group of intellectuals who were featured in Bill Moyer's television series, "A World of Ideas." The transcript of her conversation with Moyers has been published in his book, A World of Ideas.

Dr. Wortham is author of "The Other Side of Racism: A Philosophical Study of Black Race Consciousness" which analyzes how race consciousness is transformed into political strategies and policy issues.

She has published numerous articles on the implications of individual rights for civil rights policy, and is currently writing a book on theories of social and cultural marginality.

Recently, she has published articles on the significance of multiculturalism and Afrocentricism in education, the politics of victimization and the social and political impact of political correctness. Shortly after an interview in 2004, she was awarded tenure.

This article by her is something of an eye opener from an educated and thinking person.

Most importantly, I would have to abnegate my certain understanding that you have chosen to sprint down the road to serfdom that we have been on for over a century. I would have to pretend that individual liberty has no value for the success of a human life. I would have to evade your rejection of the slender reed of capitalism on which your success and mine depend. I would have to think it somehow rational that 94 percent of the 12 million Blacks in this country voted for a man because he looks like them (that Blacks are permitted to play the race card), and that they were joined by self-declared "progressive" whites who voted for him because he doesn't look like them.

I would have to wipe my mind clean of all that I know about the kind of people who have advised and taught Barack Obama and will fill posts in his administration - political intellectuals like my former colleagues at the Harvard University's Kennedy School of Government.

Finally, Americans, I would have to erase from my consciousness the scene of 125,000 screaming, crying, cheering people in Grant Park, Chicago , irrationally chanting "Yes We Can!" Finally, I would have to wipe all memory of all the times I have heard politicians, pundits, journalists, editorialists, bloggers and intellectuals declare that capitalism is dead - and no one, including especially Alan Greenspan, objected to their assumption that the particular version of the anti-capitalistic mentality that they want to replace with their own version of anti-capitalism is anything remotely equivalent to capitalism.

So you have made history, Americans. You and your children have elected a Black man to the office of the president of the United States , the wounded giant of the world. The battle between John Wayne and Jane Fonda is over - and Fonda won. Eugene McCarthy and George McGovern must be very happy men. Jimmie Carter, too. And the Kennedys have at last gotten their Kennedy look-a-like. The self-righteous welfare statists in the suburbs can feel warm moments of satisfaction for having elected a Black person.

So, toast yourselves: 60s countercultural radicals, 80s yuppies and 90s bourgeois bohemians. Toast yourselves, Black America . Shout your glee Harvard, Princeton , Yale, Duke, Stanford, and Berkeley. You have elected not an individual who is qualified to be president, but a Black man who, like the pragmatist Franklin Roosevelt, promises to - Do Something! You now have someone who has picked up the baton of Lyndon Johnson's Great Society. But you have also foolishly traded your freedom and mine - what little there is left - for the chance to feel good.

There is nothing in me that can share your happy obliviousness. God Help Us all.