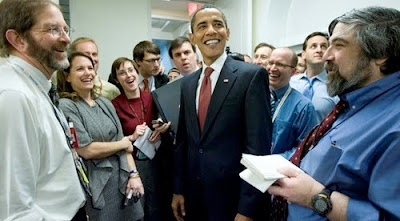 Journalists love whistleblowers. Just not when the whistle is blown on them.
Journalists love transparency. As long as they’re not the ones being exposed.
No steadfast journalism rule is unbendable when it comes to justifying and protecting the racket that is modern journalism, specifically, political journalism in the United States today. The ends justify the means for the Democrat Media Complex. They lie when they claim to be objective. They lie when they claim to be unbiased, because these so called “truth seekers” are guilty of engaging in open political warfare. And when the whistle is blown, they simply double down. “Journolist” — like Media Matters, but more insidious, if that’s possible — is an attempt to put the genie back in the bottle, technology and “the masses” uncovered the conspiracy:

Talk radio and the Internet have allowed outsiders the ability to challenge a multiple generational shift from journalism being about the story, to journalism being crafted toward a partisan end. From Newsweek killing the Lewinsky story to the Swift Boat veterans (until the undermedia pressure got too big) to the Dan Rather implosion to the open attempt to keep the Al Gore masseuse story under wraps to the John Edwards/Rielle Hunter debacle to the Van Jones admission of missing the story to the networks ignoring the ACORN video footage to the media playing up trumped up charges of racism in the Tea Party — while ignoring exculpatory evidence — to the mother of all media-as-political weaponry: the non-vetting of candidate Obama, the mainstream media has shown that it is in an ideological death spiral. And the ground is right here.

Here is a related article

Here's another article worth a look