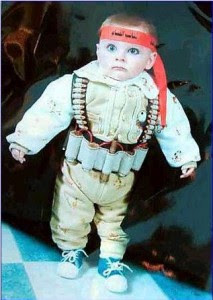 The Palestinian mother of a baby saved by Israelis wants him to get well so that he can kill them.
Haaretz reported, via Elder of Ziyon:

In Sheba’s pediatric hemato-oncology department was Mohammed Abu Mustafa, a four-and-a-half-month-old Palestinian infant. Protruding from his tiny body were pipes attached to big machines. His breathing was labored.

“His days may be numbered. He is suffering from a genetic defect that is causing the failure of his immune system,” said the baby’s mother, Raida, from the Gaza Strip, when she emerged from the isolation room. “I had two daughters in Gaza,” she continued, her black eyes shimmering. “Both died because of immune deficiency. In Gaza I was told all the time that there is no treatment for this and that he is doomed to die. The problem now is how to pay for the [bone marrow] transplant. There is no funding.”

“I got to her after all the attempts to find a donation for the transplant had failed,” [Eldar] relates. “I understood that I was the baby’s last hope, but I didn’t give it much of a chance. At the time, Qassam rockets falling on Sderot opened every newscast. In that situation, I didn’t believe that anyone would be willing to give a shekel for a Palestinian infant.”

He was wrong. Hours after the news item about Mohammed was broadcast, the hospital switchboard was jammed with callers. An Israeli Jew whose son died during his military service donated $55,000, and for the first time the Abu Mustafa family began to feel hopeful. Only then did Eldar grasp the full dramatic potential of the story. He told his editor, Tali Ben Ovadia, that he wanted to continue accompanying the family.

…Nevertheless, this idyllic situation developed into a deep crisis that led to the severance of the relations and what appeared to be the end of the filming. From an innocent conversation about religious holidays, Raida Abu Mustafa launched into a painful monologue about the culture of the shahids – the martyrs – and admitted, during the complex transplant process, that she would like to see her son perpetrate a suicide bombing attack in Jerusalem.

“Jerusalem is ours,” she declared. “We are all for Jerusalem, the whole nation, not just a million, all of us. Do you understand what that means – all of us?”

She also explained to Eldar exactly what she had in mind. “For us, death is a natural thing. We are not frightened of death. From the smallest infant, even smaller than Mohammed, to the oldest person, we will all sacrifice ourselves for the sake of Jerusalem. We feel we have the right to it. You’re free to be angry, so be angry.”

And Eldar was angry. “Then why are you fighting to save your son’s life, if you say that death is a usual thing for your people?” he lashes out in one of the most dramatic moments in the film.

“It is a regular thing,” she smiles at him. “Life is not precious. Life is precious, but not for us. For us, life is nothing, not worth a thing. That is why we have so many suicide bombers. They are not afraid of death. None of us, not even the children, are afraid of death. It is natural for us. After Mohammed gets well, I will certainly want him to be a shahid. If it’s for Jerusalem, then there’s no problem. For you it is hard, I know; with us, there are cries of rejoicing and happiness when someone falls as a shahid. For us a shahid is a tremendous thing.”