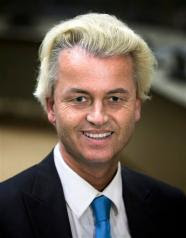 The media will portray Mr Wilders as a far right extremest. By doing so, he's now a bigot, not deserving debate of his ideas. The Left sees multiculturism and tolerance as progressive. Of course the Left will be exposed for their hypocrisy one more time, made evident so clearly by the MSM. Sadly, this will only show the great divide between the people and the elites.

AMSTERDAM — Dutch anti-Islam politician Geert Wilders went on trial Monday for alleged hate speech, even as his popularity and influence in the Netherlands are near all time highs.
Prosecutors say Wilders incited hatred against Muslims with remarks comparing Islam to Naziism and by calling for a ban on the Quran. Wilders argues he has a right to freedom of speech and his remarks were within the bounds of the law.