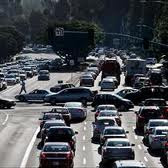 Below is an article by CBS LA about a citizen helping direct traffic during a black out. He alleviated a mile long back up within 15 minutes. He got rewarded by being ticketed by the police. Not only that, after being ticketed, the police did not take it upon themselves to direct traffic.

When the news showed the black out in San Diego, I mentioned to my wife that you don't see any police officers directing traffic. But let someone not make a complete stop and there would be an officer at the ready to give a ticket. Their motto should be changed from "Protect and Serve" to "Let me write this bullshit ticket to help pay for my bloated retirement".

Here's part of the article below:

When a major traffic light in the area went out Thursday morning, Alan Ehrlich took matters into his own hands, directing traffic at Fair Oaks and Huntington avenues.

“I grabbed a bright orange shirt that I have and a couple of orange safety flags. I took it upon myself to help get motorists through that intersection faster,” said Ehrlich.

Before Ehrlich stepped in, traffic was backed up for more than a mile and it took more than 30 minutes to get through the busy intersection.

Ehrlich said the Sept. 8 incident wasn’t the first and that the light goes out regularly.

“It was just kind of chaos of cars . . . there were stop signs up. But people were challenging each other to get through the intersection,” said Richard Gerrish who works at an office located at the intersection.


Gerrish said Ehrlich cleared up the mess in 10 minutes. After 15 minutes, South Pasadena police say they finally received a call about their newest traffic officer.

Police responded to the scene and told Ehrlich to stop and issued him a ticket, but never stepped into direct traffic themselves.