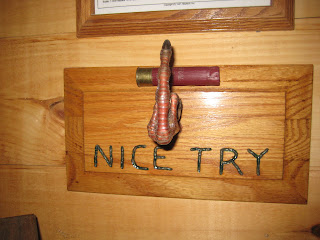 Wow, I never thought I'd read this in the London Telegraph. Is it possible that some may be waking?

Barack Obama’s chances of re-election in three and a half years’ time may be evaporating at unprecedented speed, but his presidential ambitions could still be realised in another direction. He would be a shoo-in to win the next Russian presidential election, so high is his popularity now running in the land of the bear and the knout. Obama has done more to restore Russia’s hegemonial potential in Eastern and Central Europe than even Vladimir Putin.

His latest achievement has been to restore the former satellite states to dependency on Moscow, by wimping out of the missile defence shield plan. This follows on his surrender last July when he voluntarily sacrificed around a third of America’s nuclear capability for no perceptible benefit beyond a grim smile from Putin. If there is one thing that fans the fires of aggression it is appeasement.

Despite propaganda to the contrary, 58 per cent of Poles were in favour of the missile shield. But small nations must assess the political will of larger powers. Thanks to President Pantywaist’s supine policies, the former satellite states can see that they are fast returning to their former status. The American umbrella cannot be relied upon on a rainy day. They have been here before. Poles remember how a leftist US president sold them out to Russia at Tehran and Yalta. The former Czechoslovakia was betrayed twice: in 1938 and 1945.

If the word is out that America is in retreat, it will soon find it has no friends. The satellites will pragmatically accept their restored subordination, without openly acknowledging it, and co-operate with their dangerous neighbour, ushering in a new generation of Finlandisation.

Bringing unstable states like Georgia into Nato would be a liability, not a defence. The crazy notion of a US-Nato-Russian combined defence policy has all the staying power of the Ribbentrop-Molotov Pact. Ronald Reagan, assisted by Margaret Thatcher, implemented the sensible principle that Russia, from the time of Peter the Great, respects only strength and steely political will. A pushover in the Oval Office is the best news Russian expansionists have heard since the fall of the Berlin Wall.

Barack Obama is selling out America and, by extension, the entire West. This is a catastrophe for America and the wider world

Email ThisBlogThis!Share to TwitterShare to FacebookShare to Pinterest
Labels: Russia