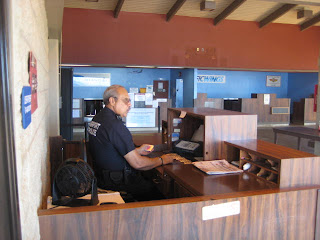 The above picture is a security guard at Kaanapali, Maui airport. He's playing solitare behind his podium. Not a busy airport.

Back to the internet and my previous post. I don't watch much TV nowadays. I spend way more time on the internet. When I do watch TV, it's either to watch golf, which I Tivo or the Food Network (also Tivoed). In fact, a few months ago I was at my Father in law's house watching TV and it was really depressing watching all those commercials. My God, there's a lot of commercials. That's one of the reasons I don't listen to talk radio either. I just can't be bothered with all the commercials.

And when it comes to network news, I don't trust them. They definitely are biased toward Obama, and do not report the news in an honest fashion. And of course they fear monger. Fear sells, and they do a good job of promoting it. As Dennis Prager says, it's the proctologist's view of the world. And then the network news business now seems nothing more than a platform for the phamaceutical business.

MSM, ie, Network news, and major newspapers are dying. And good riddence. People like Dan Rather I loathe.