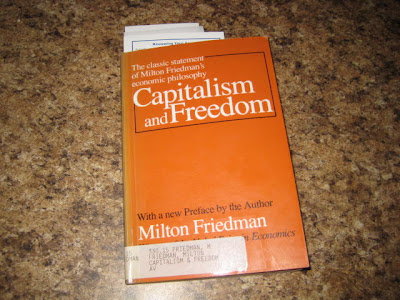 The United States is on the brink of passing legislation that will give government control of over 1/6 of our nation's economy.

"The scope of government must be limited. Its major function must be to protect our freedom, to preserve law and order, to enforce private contracts, to foster competitive markets."

From Copenhagen 15, the most leftest president Obama, to more and more government control of American industry, America is no longer the country it once was.

I am afraid for my country.
I am afraid -- actually, certain -- we are losing the heart and soul that made America unique in human history. Yes, we have enemies, but the greatest danger comes from within.

Watching the freak show in Copenhagen last week, I was alternately furious and filled with dread. The world has gone absolutely bonkers and lunatics are in charge.

Mugabe and Chavez are treated with respect and the United Nations is serious about wanting to regulate our industry and transfer our wealth to kleptocrats and genocidal maniacs.

Even more frightening, our own leaders joined the circus. Marching to the beat of international drummers, they uncoupled themselves from the will of the people they were elected to serve.

President Obama, for whom I voted because I believed he was the best choice available, is a profound disappointment. I now regard his campaign as a sly bait-and-switch operation, promising one thing and delivering another. Shame on me.

Equally surprising, he has become an insufferable bore. The grace notes and charm have vanished, with peevishness and petty spite his default emotions. His rhetorical gifts now serve his loathsome habit of fear-mongering.

"Time is running out," he says, over and again. He said it on health care, on the stimulus, in Copenhagen, on Iran.

Instead of provoking thought and inspiring ideas, the man hailed for his Ivy League nuance insists we stop thinking and do what he says. Now.

His assertion we will go bankrupt unless Congress immediately adopts the health monstrosity marks a new low. At least it did until he barged into a meeting in Copenhagen to insult the Chinese with the same do-it-now arrogance on carbon emissions.

Don't get me wrong -- it's OK to insult the Chinese, but save it for an urgent life-and-death issue. Iran qualifies, with its plans for a nuclear arsenal, yet Obama has not pushed China on that issue with the fervor of his attacks on their dirty smokestacks.