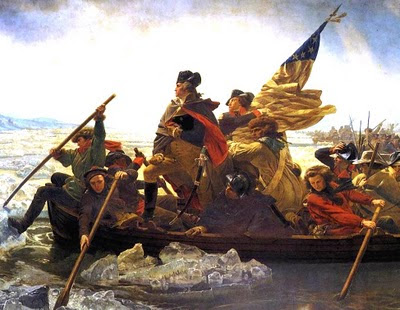 
'I think the game is pretty near up'

The American army was defeated. Outnumbered and demoralized, the ragged soldiers had only escaped complete destruction by a desperate retreat. Some of the troops had deserted, and others we threatening to leave when their enlistments expired.

George Washington's patriot army had been beaten badly in the Battle of Long Island in August 1776, suffering more than 1,300 casualties before Washington could evacuate his troops to Manhattan. But the British commander, William Howe, had followed that by once more defeating the Americans at White Plains in October and again at Fort Washington in November, and Washington was forced to abandon New York.

Retreating across New Jersey, with Howe's Redcoats in pursuit, the only hope for the Americans was to reach Pennsylvania, putting the Delaware River between them and the enemy. Merely to accomplish this retreat was a difficult task. Heavy autumn rains fell, turning the dirt roads to quagmires. Teams of men and horses struggled to pull the army's artillery and wagons through the deep mud.

Yet even if they could escape the pursuing British, there was little hope the Americans could reverse the disasters that had befallen their cause in the five months since they had declared their independence. Many of the volunteer troops under Washington's command had signed up for short-term enlistments, which would expire at the end of the year. It was this gloomy prospect that caused Thomas Paine to write:
These are the times that try men's souls. The summer soldier and the sunshine patriot will, in this crisis, shrink from the service of their country; but he that stands by it now, deserves the love and thanks of man and woman.
Many more desperate hours lay ahead in the long struggle for American independence, but as fall turned to winter in 1776, it seemed that the flame of liberty was doomed to flicker out forever. One depressed officer wrote home to a relative, "I think the game is pretty near up."

However, as long as there was anything left to fight with -- and anything to fight for -- George Washington would fight. And no sooner had he withdrawn his army into Pennsylvania than Washington began planning what remains arguably the most daring attack in American military history.

Howe believed, quite reasonably, that the colonial rebels had been so badly beated that they would go into winter quarters in Pennsylvania. So the British commander withdrew his main force to New York, and left a string of garrisons to keep an eye on Washington's battered army.

With only 2,400 men fit for duty, Washington issued three days rations and collected every boat available. At 3 p.m. on Christmas Day, the troops gathered on the banks of the Delaware River and prepared for the crossing. The river was icy. Sleet and snow began falling as the troops embarked. It took nearly 12 hours -- until 3 a.m. on December 26 -- to get the entire force across.


The watchword that night was "Victory or Death," and Washington showed his grim determination that morning during the pre-dawn march to Trenton. Maj. Gen. John Sullivan sent a courier to report Sullivan's concern that his men's gunpowder had become wet due to the storm. Washington replied to the courier: "Tell General Sullivan to use the bayonet. I am resolved to take Trenton."

Take it, he did. Shortly after daybreak, Washington's army attacked Trenton, overwhelming the garrison of Hessian mercenaries, cutting off their retreat and capturing nearly 900. Washington followed up, a little more than a week later, with another brilliant victory at Princeton, inflicting 450 casualties on the British.

This surprising reversal of fortune -- a beaten army that rallied to victory -- was a major turning point in the war. Although Trenton and Princeton were relatively minor battles in terms of the numbers engaged on each side, they gave hope to the patriot cause.

And whatever became of that depressed officer, who in a mood of despair wrote home that he feared "the game is pretty near up"?

Well, he went on to a quite remarkable career, both in the military and in politics. You see, that officer's name was none other than George Washington.