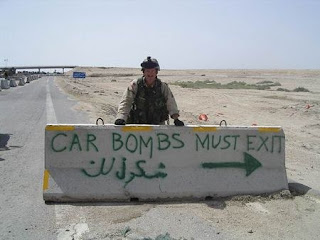 It's almost hard to believe but Wednesday, January 20 marks exactly one year since President Bush left the White House.

During his last public ceremony as commander in chief, he was booed by thousands of Americans who simutaneously cheered for Barack Obama as he was sworn into office on the steps of the U.S. Capitol.

Except for a June 17 speech in Erie, Pennsylvania in which Bush defended his policies and criticized Obama’s, the former president has been remarkably silent about his successor. He has not fired back at Obama despite the new administration inappropriately blaming Bush for all of their failures.

One year after taking office however, Obama has done a total reversal on his isolationist, non-interventionist foreign policy, and is now pushing President Bush’s neo-conservative philosophy as a justification for starting a new war in Afghanistan. What the Democratic Party once criticized as an over-simplified good vs. evil argument has become the cornerstone of Obama’s reasoning.
“Evil does exist in the world,” Obama recently admitted. “A nonviolent movement could not have halted Hitler’s armies. Negotiations cannot convince al-Qaeda’s leaders to lay down their arms. To say that force is sometimes necessary is not a call to cynicism – it is recognition of history; the imperfections of man and the limits of man.”

In the wake of this stunning adoption of the Bush foreign policy doctrine, there is little, if any dissent. The same people who crucified Bush for liberating Iraq are hardly criticizing Obama for using force to promote democracy in Afghanistan.

Any American who thinks that Bush was misdirected when he sent troops to Iraq in 2003 can’t possibly deny that renewing war in Afghanistan in 2009 to hunt Al Qaeda, eight years after the Sept. 11 attacks is, at the least, equally fallible.

Still, Obama is receiving the kind of public support that an American president, any president, deserves during wartime. Many anti-war activists, journalists and elected officials have been remarkably quiet, affording the new commander in chief the opportunity to launch a successful war campaign.

Very few Americans showed the same faithfulness to President Bush, including members of his own party. Republicans who favored non-interventionism to nation building abandoned Bush, and Democratic senators like John Kerry, John Edwards and Hillary Clinton who voted for the war turned against it before the 2004 elections so they would have the ammunition they needed to criticize their incumbent opponent.

America quickly forgot about how President Bush charismatically lifted our spirits during some of the darkest moments of our nation’s history when the Twin Towers collapsed. After all, even Senator Kerry admitted Bush’s handling of the aftermath of the 9/11 attacks was “terrific,” during the 2004 presidential debates.

But after President Bush successfully secured America in the wake of the Sept. 11 attacks, he was rewarded with accusations of committing human rights violations and war crimes – an incredible irony since his policies were responsible for liberating tens of millions of people in Afghanistan and Iraq. Some Americans accused Bush of lying and starting a war under false pretenses simply because our troops never found actual weapons of mass destruction.

Despite what Michael Moore implied in his film "Fahrenheit 9/11," Congress did not base their 2002 authorization for the Iraq War solely on the premise that Saddam Hussein either had or was trying to acquire weapons of mass destruction. Their legislation reads very clearly that America’s purpose in sending troops back to Iraq was to enforce U.N. resolutions, some of which were violated in the 1990’s and probably should have been enforced by President Clinton. Whether actual weapons were found or not, the war in Iraq was legally and morally justifiable, and necessary.

In addition to enduring criticism for his war policies, millions of Americans demanded the new Obama administration prosecute Bush for his decision to indefinitely holding detainees charged with war crimes. When President Obama signed an executive order in May that reinforced that same Bush policy, the far left was mute.

Almost no one said a word. Apparently, its acceptable for Obama to indefinitely hold detainees, just not Bush.

As Obama continues to make decisions that mirror the Bush doctrine, it is becoming apparent that the former president was not ignorant or irrational in his foreign policy decisions despite the harsh criticism and disloyalty he endured. He was in fact, ahead of his time, a visionary who understood politics and warfare in the modern age of terrorism.

That is why Obama is now following his lead.

It should be obvious now, even to Obama’s most passionate supporters that shielding the free world requires more than mere words like “hope” and “change.” Bush’s detractors should be embarrassed having arrogantly thought they could do it better, and those Republicans who abandoned Bush when he needed them most should take a moment to reflect on their fortitude or lack thereof.

Americans who chastised President Bush for removing Saddam Hussein from power in Iraq should apologize and show him the same respect they are now showing President Obama as he neutralizes the Taliban in Afghanistan.

George W. Bush seemed to have an almost mystical understanding of what the American people needed when we needed it most. He reminded all of us of why we should be proud to be Americans at a time when there was a whisper that we brought the Sept. 11 attacks upon ourselves for promoting democracy abroad.

President Bush deserves our respect, not our betrayal.

Jeffrey Scott Shapiro is a journalist and lawyer who served on Senator John F. Kerry’s legal team during the 2004 election. He is currently organizing a nationwide effort called “Honor Freedom” to correct the historical record about President Bush and the Bush foreign policy doctrine, which can be reached at www.honorfreedom.com and on Facebook at http://www.facebook.com/group.php?gid=41317929699&ref=ts or Twitter at http://twitter.com/honorfreedom.