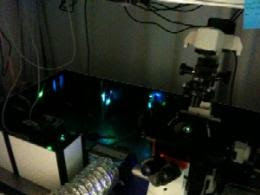 The first generation of fluorescence proteins (which recently earned discoverers a Nobel Prize) helped to solve this problem by allowing scientists some ability to watch marked proteins interact in real time inside cells. But when many molecules are fluorescently tagged inside a cell, the amount of light they emit prevents observers from seeing what individual proteins are doing because they all fluoresce at once, creating a glare. Tagging all similar proteins in a cell yields an image that’s too blurry to provide useful data.

The new tagging technique used with the microscope solves this problem by adding a “light switch” that allows the researcher to control the fluorescent marker. Instead of being on constantly, fluorescent tags can be individually selected to turn on using small amounts of purple light, allowing each protein to be seen individually. As the physicist explains, when only a small amount of light is used, it acts as a particle rather than a wave and excites only one fluorescently tagged molecule at a time.

Further, fluorescence from these proteins only lasts a few seconds and then goes dark. Another small set of proteins can be turned on with more purple light. Used in this way, the new, more precise microscope can then create a map of the individual proteins, which is captured on a high resolution camera.

The new microscope also solves another major problem associated with the first generation of light microscopes: Images are so blurry that molecules often appear to be 50 times their actual size. This results from the large amount of fluorescence that each tagged protein emits—researchers can’t distinguish between the real object and the fuzzy patch of light that surrounds it. The effect on investigators is much like asking for directions to a particular office and being told only what building it’s in, Ross explains—without an exact location, the answer is not helpful.

The new fluorescence techniques take advantage of the fact that the brightest light emitted by the objects will come from their centers. Ross and colleagues developed a mathematical formula that can fit the shape of a single molecule’s light intensity pattern. This allows a computer to locate the protein’s center within 20 billionths of a meter instead of 200, making the object appear much more like actual size.

Ross summarizes that both the Fluorescence Photoactivated and Localization Microscopy (FPALM) and STORM techniques that she and colleagues are perfecting should allow scientists to see individual molecules by exciting the fluorescent tags with a small amount of light. STORM uses slightly different dyes that can be “tuned” to tag specific molecules. By tagging different proteins with different fluorescent tags, scientists can also observe the dynamics of multiple proteins concurrently, not possible in first generation fluorescence microscopy.