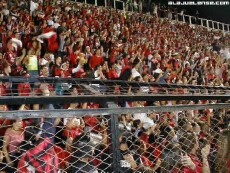 Spectator sports is huge in America.

Rallying around teams gives us identity. We're part of something larger than ourselves.

It also gives us justification to eat a whole lot of bad foods. Why? Because if everyone else is doing it, and we're part of the tribe, than it's OK for us to do it too. And the commercials promote it just a bit too, don't you think?

From a long hard week, we deserve to take a break and watch our favorite football game. We get a chance to cheer, yell, and get emotionally invested with others.

But spectator sports has gone too far. How many do not only not play any sports themselves, but have never ever played the sport that they are so much a fan? So we know all the names of teams and all the quarterbacks. That's sad. It really is. Who's the Chief Justice of the Supreme Court?

I'm not trying to be a snob. I like my Polo too. But if our time is spent between working and watching sports, how much time do we give to more serious issues?

And let's be honest. Spectator sports isn't just one weekend game. It's a 24/7 all consuming lifestyle.

When I look at spectator sports today, I think of how the Romans did it to placate the masses. The same today. We mind numbingly sit there in front of the TV hour after hour, year after year, watching sports that in the grand scheme of things, really don't matter.

Have you ever gone to a sports bar, looked at all the TVs and all the different sports, and noticed that they are played outside (by outside I actually mean out of doors, or away from home), while you are indoors?