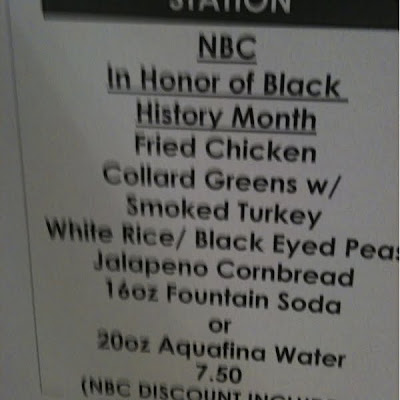 
The sign in the NBCU cafeteria has been removed. We apologize for anyone who was offended by it.

This Twitter feed appears to have been started just to tweet this was set up a few months ago, but was used for the first time today.

> Update at 5:30: NBC-owned TheGrio.com (an “African American Breaking News and Opinion” site), has a response from the chef who came up with the meal and made the sign. In part:

Remember how Fuzzy Zoeller the golfer lost all his endorsements because he mentioned Tiger should not have fried chicken for the Champions dinner?