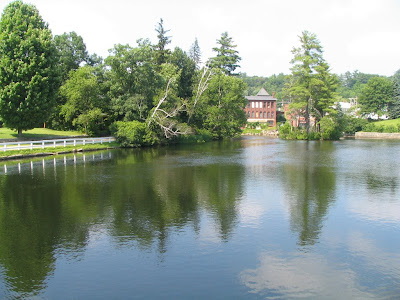 From The American Interest Online

The New York Times turned down the Watergate story, giving the Washington Post ownership of the story of the decade. Now the Washington Post is going for a repeat, scooping the somnolent Times on the Climategate story. The Post story by Juliet Eilperin and David A. Farenholdt is no skeptic’s dream, but Post readers now know something that Times readers are still in the dark about: the climate change movement has taken a serious hit in recent weeks as allegations of misconduct and high profile errors undermine the credibility of the key institutions and figures in the movement.

The Times‘ behavior is increasingly hard to explain. In the last month the paper has given away a huge story once again, this time handing it over to the British press overseas and, over here, to the blogosphere and, finally and belatedly, the Washington Post. Coming at a time when the Times is on the defensive in terms of its journalistic reputation and its financial health, the impact of the current failure is likely to be significantly greater. Authority is the Times‘ most important asset; by missing Climategate the Times is not only doing its readers a serious disservice. It is reinforcing the narrative that the Grey Lady of the mainstream media is too slow, too hampered by inhibitions and bias, too close to its sources, to serve as a reliable source for news.

This Sunday’s “Week in Review” would have been a perfect place for the Times to give readers a thorough, balanced and informed account of the swirling accusations and revelations that promise to end the Obama administration’s ability to deliver on its commitment to pass comprehensive climate change legislation in 2010. News of the political collapse of the climate change movement was deemed unfit to print; it would have upset too many people. Instead, the Times ran with, among other things, two stories on the implications of the Greek crisis, a review of Victorian era personal classifieds, a piece on the evils of soda pop and a helpfully lighthearted introduction to Canada which included the information that the Maple Leaf stands for nature and growth while the beaver stands for loyalty and industry.

I am not sure how long the reputation of a great newspaper can withstand the consequences of this kind of news judgment; the steady (and to me, painful and unwelcome) erosion of the Times‘ influence and prestige is unlikely to end until its pages regain the reputation as the first, best place to learn about the vital events of the day. At some point, the Times will simply have to break down and let its readers in on the Climategate story. When that happens, it will be interesting to see how it explains why it chose not to inform its readers, many of whom care passionately about this issue, of a series of vital developments unfolding one after the other on a matter of great concern. Was the newspaper so blinded by entrenched bias and assumptions that it was simply unable to see what was news? Or did pro-environmentalist staffers actively work to block the paper’s ability to cover a major news story because they didn’t think publication would benefit an agenda they held was of enormous global importance?

Meanwhile, out in the real world, the multifaceted credibility collapse that is Climategate majestically and inexorably unfolds. The IPCC and its increasingly embattled chair have taken another major blow; closer examination of IPCC’s claim that North African food production would fall 50 percent in the next decade reveals that there was no scientific evidence for the claim, that the IPCC itself had solid evidence against it, and that Dr. Pachauri was instrumental in publicizing the false but attention-getting statement. The core temperature data that the IPCC used to establish the degree of global warming to date and on which it based its predictions for the future, is coming under tougher scrutiny. As if this wasn’t enough, Professor Phil Jones, the director of the Climate Research Unit at East Anglia University, the source for much of the core climate data and the author of some of the most damaging e-mails revealed when stolen emails from climate scientists were made public, answered questions from the BBC. His answers to some of these questions will give climate skeptics even more ammunition. Examples:

BBC – Do you agree that from 1995 to the present there has been no statistically-significant global warming? Jones: Yes, but only just. I also calculated the trend for the period 1995 to 2009. This trend (0.12C per decade) is positive, but not significant at the 95% significance level. The positive trend is quite close to the significance level. Achieving statistical significance in scientific terms is much more likely for longer periods, and much less likely for shorter periods. BBC: When scientists say “the debate on climate change is over”, what exactly do they mean – and what don’t they mean? Jones: It would be supposition on my behalf to know whether all scientists who say the debate is over are saying that for the same reason. I don’t believe the vast majority of climate scientists think this. This is not my view. There is still much that needs to be undertaken to reduce uncertainties, not just for the future, but for the instrumental (and especially the palaeoclimatic) past as well.

What? There is no statistically significant evidence of global warming for the last fourteen years, and the debate over global warming is not over in the opinion of “the vast majority of climate scientists?” And this is what a defender of global warming now says? No one who depends on the New York Times for information has a clue that any of this could be true. For these faithful readers, the scientific consensus is ironclad, the discussion is over, and only flat-earthers and oil companies think otherwise. And there is more. The UK’s Guardian, whose deep editorial sympathy for the climate change movement has not overcome its journalistic good sense, has published an investigation into Professor Jones’ handling of data which suggests that Dr. Jones himself may have messed up big time. The Guardian story of February 9 reports serious allegations that vital data on Chinese weather stations used by Professor Jones as the basis for an important paper published in Nature magazine no longer exist. Lost in the clutter of Jones’ poorly managed office records? Skeptics claim that the data never existed and Jones is covering for fraud. Either way, since the paper was cited as an authority by the IPCC on an important issue, the authority of climate science will take another nasty knock. The scientific consequences of all this are very far from clear. It may still be true that global warming is an urgent planetary problem that should be addressed quickly to ward off catastrophe. It may even be, as Bill McKibben stoutly maintains in The Washington Post, that ‘Snowmageddon’ is just another piece of evidence pointing to rapid warming of the globe. Personally, I’m still clinging to the rebuttable presumption that global warming is real and it is serious, but I have to admit I wouldn’t be as surprised now as I would have been three months ago to discover that the truth turns out to be somewhat less dramatic, less categorical and less immediately actionable than what we’ve been led to expect.

But the story the Times cannot bring itself to print is not about belief. It is a political story that the Times is failing to report. Can it be that the editors and reporters of what for the last three generations has been America’s newspaper of record simply cannot the dots? Is it so hard to figure out that the shift to the right in the US political climate since last summer and the loss of the Democratic supermajority in the Senate plus the political boost that Climategate gives opponents of comprehensive climate change action means that serious legislative action in the US this year on climate change is a dead duck? The Times doesn’t have to go this far to have a major story on its hands: what about “Prospects for Cap and Trade Dimming as Climate Skeptics Rally?”

But everything is political, even the news. I gather from friends better connected than I that many top environmentalists in the US are still in denial, still hoping that somehow this will all go away.

My guess is that some of the environmentalists are hoping that even if strong action can no longer be expected in Congress, President Obama can be lobbied to push through regulatory changes and other executive actions that get the job done. This Times story gives the possibility some credence. If you were the rattled head of a major green organization contemplating the possible meltdown of a decade long campaign to get a binding international agreement to stop global warming, lobbying the White House at this point could well look like your last possible hope both to save the planet and to avoid a devastating setback to a movement and a cause that has consumed your professional life.

Even that will be lost if the mainstream media picks up the Climategate story and really runs with it. In the UK, a previously strong public consensus that agreed that global warming existed and was caused by human action has melted away since November. Americans were always more skeptical about global warming than our more biddable British cousins; how will the polls move here as this stuff comes out? Could somebody or several somebodies at the Times hope they are saving the planet by keeping the Climategate story under wraps?

As long as this story was rumbling out there in the blogosphere, Fox News and other ‘below the salt’ media outlets, the environmental establishment can pretend to itself that nothing has changed. The environmental groups and individuals in the President’s base can lobby hard to get him to push for legislative action or sign executive orders that advance the agenda. If that is the calculation, it is a very short sighted one. Not only does it leave the Times looking unbelievably foolish when the Washington Post beats it to the story, the political strategy was always doomed to fail.

Comprehensive climate legislation was already a hard sell before Climategate; the recession had driven environmental issues to the absolute rock bottom of the public’s priority list. If Congress, currently fumbling around with and so far failing to produce either a jobs bill or a health bill, now turns its attention to a big climate bill — even as the science behind it appears increasingly suspect to the public — how will that play in the fall? If the President short circuits the legislative procedure and makes major energy policy by executive order or regulatory decree even as from the public’s standpoint the scientific consensus is becoming less solid and less reliable, where does that leave the White House? As this Politico story by Jonathan Martin reminds us, Republicans are already using the climate issue to target vulnerable Dems.

Here’s a thought for the truly twisted conspiracy theorists to chew on: could the New York Times be working for a Republican victory this fall? Probably not, but the paper of record couldn’t be doing more to help the GOP on this issue if it tried.