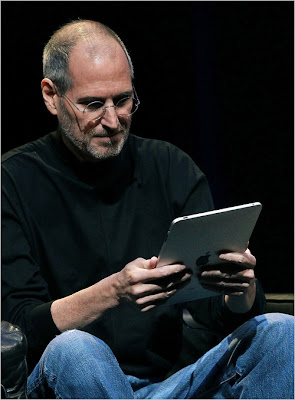 I know I'll be buying this the day it arrives. Kudos to Steve Jobs. This is going to be a lot of fun. Imagine going to a restaurant. The waitress brings a menu. No thanks, I have it right here (as I show her my Ipad). After ordering, we purchase tickets to the comedy show that begins after dinner. It's only a 10 minute walk, but even that is shortened. Mr Jobs gave me the code to make the lights turn green.

The more, the better. That’s the fashionable recipe for nurturing new ideas these days. It emphasizes a kind of Internet-era egalitarianism that celebrates the “wisdom of the crowd” and “open innovation.” Assemble all the contributions in the digital suggestion box, we’re told in books and academic research, and the result will be collective intelligence.

Yet Apple, a creativity factory meticulously built by Steven P. Jobs since he returned to the company in 1997, suggests another innovation formula — one more elitist and individual.

This approach is reflected in the company’s latest potentially game-changing gadget, the iPad tablet, unveiled last week. It may succeed or stumble but it clearly carries the taste and perspective of Mr. Jobs and seems stamped by the company’s earlier marketing motto: Think Different.

Apple represents the “auteur model of innovation,” observes John Kao, a consultant to corporations and governments on innovation. In the auteur model, he said, there is a tight connection between the personality of the project leader and what is created. Movies created by powerful directors, he says, are clear examples, from Alfred Hitchcock’s “Vertigo” to James Cameron’s “Avatar.”

At Apple, there is a similar link between the ultimate design-team leader, Mr. Jobs, and the products. From computers to smartphones, Apple products are known for being stylish, powerful and pleasing to use. They are edited products that cut through complexity, by consciously leaving things out — not cramming every feature that came into an engineer’s head, an affliction known as “featuritis” that burdens so many technology products.

“A defining quality of Apple has been design restraint,” says Paul Saffo, a technology forecaster and consultant in Silicon Valley.

That restraint is evident in Mr. Jobs’s personal taste. His black turtleneck, beltless blue jeans and running shoes are a signature look. In his Palo Alto home years ago, he said that he preferred uncluttered, spare interiors and then explained the elegant craftsmanship of the simple wooden chairs in his living room, made by George Nakashima, the 20th-century furniture designer and father of the American craft movement.

Great products, according to Mr. Jobs, are triumphs of “taste.” And taste, he explains, is a byproduct of study, observation and being steeped in the culture of the past and present, of “trying to expose yourself to the best things humans have done and then bring those things into what you are doing.”

His is not a product-design philosophy steered by committee or determined by market research. The Jobs formula, say colleagues, relies heavily on tenacity, patience, belief and instinct. He gets deeply involved in hardware and software design choices, which await his personal nod or veto. Mr. Jobs, of course, is one member of a large team at Apple, even if he is the leader. Indeed, he has often described his role as a team leader. In choosing key members of his team, he looks for the multiplier factor of excellence. Truly outstanding designers, engineers and managers, he says, are not just 10 percent, 20 percent or 30 percent better than merely very good ones, but 10 times better. Their contributions, he adds, are the raw material of “aha” products, which make users rethink their notions of, say, a music player or cellphone.

“Real innovation in technology involves a leap ahead, anticipating needs that no one really knew they had and then delivering capabilities that redefine product categories,” said David B. Yoffie, a professor at the Harvard Business School. “That’s what Steve Jobs has done.”

Timing is essential to make such big steps ahead. Carver Mead, a leading computer scientist at the California Institute of Technology, once said, “Listen to the technology; find out what it’s telling you.”

Mr. Jobs is undeniably a gifted marketer and showman, but he is also a skilled listener to the technology. He calls this “tracking vectors in technology over time,” to judge when an intriguing innovation is ready for the marketplace. Technical progress, affordable pricing and consumer demand all must jell to produce a blockbuster product.

Indeed, Apple designers and engineers have been working on the iPad for years, presenting Mr. Jobs with prototypes periodically. None passed muster, until recently.

The iPad bet could prove a loser for Apple. Some skeptics see it occupying an uncertain ground between an iPod and a notebook computer, and a pricey gadget as well, at $499 to $829. Do recall, though, that when the iPod was introduced in 2001, critics joked that the name was an acronym for “idiots price our devices.” And we know who had the last laugh that time.

Email ThisBlogThis!Share to TwitterShare to FacebookShare to Pinterest
Labels: Ipad