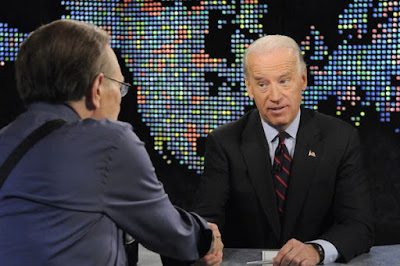 Thank goodness, Vice President Joe Biden went on CNN to chat with Larry King Wednesday night. So many think things are not going so well for the Democrat administration, as The Ticket chronicled here.

Many Americans recall the ex-Sen. Biden's Democratic primary plans to give in to Iraq's fractious factions and carve the country into three territories. And even more probably recall Biden's boss' plan to halt the Iraq war years ago. As long as it got started anyway without the permission of the then state senator.

Plus, of course, Obama's vehement opposition to the 2007 American troop surge of you-know-who from Texas that Obama knew for certain was only going to worsen sectarian strife there. (See 2007 video here.)....


Well, of course, it didn't turn out that way, thanks in large measure to the brave service of hundreds of thousands of U.S. troops who served in that war-torn land and helped peace to break out despite the loud political acrimony back home over their role.

Now, the Obama-Biden pair that opposed the Iraq war and its tactics and predicted their failure is prepared to accept credit for its success.
It seems that Biden, who's from Delaware when he's in Delaware and Pennsylvania when in Pennsylvania, is certain now that Iraq will turn out to be one of the Obama-Biden administration's greatest achievements.

Here's how Biden put it to Lar:

I spent -- I've been there 17 times now. I go about every two months -- three months. I know every one of the major players in all the segments of that society. It's impressed me. I've been impressed how they have been deciding to use the political process rather than guns to settle their differences.

Biden did not elaborate on what all the administration's other "great achievements" were so far.

No doubt, Iraqis too are very thankful for that 2008 U.S. election. (Full King transcript here.)