Previously in my blog I posted this.


In January I interviewed Ronnie, who had quadruple heart bypass surgery at the relatively young age of 46. On the member center of DrFuhrman.com I recently asked him to describe what the surgery was like, and requested that he “spare no details.” All of us were deeply moved by his story, and Dr. Fuhrman suggested that I post it here on Disease Proof. Dr. Fuhrman also stated that bypass surgeries are performed all over the country, every hour of every day; and that this suffering can be completely avoided. May we all wake up to the serious reality of eating disease promoting foods.

What were the few days leading up to your surgery like?

My addictions and health had deteriorated to the point that when I ate, I would have difficulty breathing. I couldn’t do the simplest of tasks (shower, take out the trash, move furniture, mop or vacuum the floor) without being out of breath. My entire body hurt continuously. I had bleeding hemorrhoids and had to wear protection that often wasn't adequate. Every time I went to the doctor, about every two weeks, he would look at me and shake his head in disgust as he wrote out a new or stronger prescription. Every time he listed the same reason for my infirmities: morbid obesity.
I was taking high doses of two, powerful blood pressure medications and was prescribed the third because it was still high, 161/110. I knew I was in trouble. In the few days preceding my surgery, I remember feeling impending doom. I shucked it off like I always did thinking in the end I would get everything right with a pill or a sudden burst of self will. On September 8, 2005, I ate a heavy lunch and then went to my office and sat down at the computer. I felt discomfort in my chest, but it wasn’t severe so I thought it was indigestion. It got a little stronger so I told my staff that I was going home. I was awakened the next morning by chest pain that was more severe, and it wouldn’t go away. I went to the local hospital and was sent home after a battery of tests which they forwarded to my doctor.
My doctor called on Saturday at 8pm and told me to go immediately to a specific emergency room in Dallas that specializes in heart care. They took one look at me and the symptoms I was presenting and admitted me. I remember the doctor bending over me, and in a solemn tone said, “Mr. Valentine, I’m so, so sorry, but you’re going to have to have bypass surgery, and you’re going to have it quickly.” Needless to say my wife and I were devastated.


Please explain what bypass surgery was like.
I can’t begin to explain all the images and thoughts that ran through my head as I awaited open heart surgery. The regrets of past actions weighed heavily on my heart. I felt utterly hopeless and full of self disdain. Plus, it was humiliating to be shaved from head to toe by two aides who were more concerned with the way their kids had been misbehaving than the patient who was facing the most traumatic event of his life.
Right before being transferred to the operating room, I asked to see my wife, kids and brother. They were standing by my side as I explained what I wanted in the event the surgery didn't go well. I made it clear that I didn’t want to remain on life-support, and told them how much I loved them. As they were leaving the room, I called my brother aside, grabbed his hand, and felt his strength as he clasped my hand. I pulled him close and looked deep into his tear filled eyes and said, "Gary, you will be the one that has to make the call. Peggy will not have the strength." We put our foreheads together and shared one of the deepest, most heartfelt moments that I have ever experienced. Neither one of us could speak, but volumes were communicated in that utter silence.
I was ready. I called for the techs, and as they began to transfer me to the gurney, I tried to rise up a little and my back suddenly cramped. I exclaimed, "My back is cramping" but they just laughed it off and said, "Pretty soon you won't be feeling anything."
In the OR they transferred me to a stainless steel slab, and I keep telling them that my back was cramping in a full spasm and that I needed to sit up to relieve it. They wouldn’t let me due to all the needles and wires hooked up to me. So I suffered in excruciating pain while staring at the bright light overhead.
Next, the doctor put a mask on my face and said, “This will take care of your pain and give you relief.” I said a prayer, pictured my wife in my mind, and then closed my eyes...
The next thing I recall was the most exhilarating thing I've ever heard: my name!
My wife and the nurses were calling my name in the recovery room. I had survived! I was given a new lease on life; a new chance, and I was ready for anything . . . so I thought.
That joyful moment was overcome with excruciating pain in my back. My spasm was still there after five hours of surgery! Then I felt like I was choking to death because of the ventilating tube that was stuck down my throat. The back spasm would not let my lungs expand enough to get a good breath. When I tried, I would get a sharp pain that would stop my lungs from expanding and filling with air. I desperately tried to communicate this to the nurses, but they just blew it off as me wanting the tube out of my throat, which is normal for everyone after surgery.
I was strapped to the bed. I couldn’t move for over eight hours while feeling the awful cramping, coupled with the fact that I couldn’t breathe. I felt like I’d been buried alive. When they finally took the tube out, and let me sit up, my spasm immediately went away.
Then I was transported to a hospital room for the arduous task of recovery.
Six days afterwards, the surgeon came into my room to examine me, and after pushing on my chest, he made the decision to operate again to re-secure my chest bone because one of the wires had given way.
I had no choice. I had to undergo another major surgery.

Almost three years later, Ronnie had to have three stents put into an artery, and was sent home to die. The next morning he awoke at 3am with more chest pain so he typed “reverse heart disease” into his computer’s search engine. That day, July 10, 2008, he discovered Dr. Fuhrman’s web site and embraced the high nutrient eating-style. Today, Ronnie is the epitome of health and fitness. Not only did he lose 140 lbs, but he is now free from all medications, surgical procedures and dependence upon doctors. He is now well!

Imagine if Ronnie had found Dr. Fuhrman earlier, none of this would’ve been necessary. When the nation learns about how effective Dr. Fuhrman’s nutritarian diet is to rapidly reverse even very advanced heart disease, who in their right mind would choose bypass surgery? 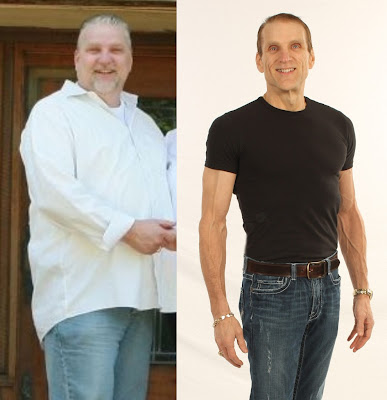