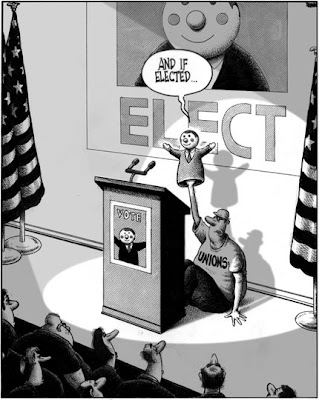 The camera focuses on an official of the Service Employees International Union (SEIU), California’s largest public-employee union, sitting in a legislative chamber and speaking into a microphone. “We helped to get you into office, and we got a good memory,” she says matter-of-factly to the elected officials outside the shot. “Come November, if you don’t back our program, we’ll get you out of office.’


The video has become a sensation among California taxpayer groups for its vivid depiction of the audacious power that public-sector unions wield in their state. The unions’ political triumphs have molded a California in which government workers thrive at the expense of a struggling private sector. The state’s public school teachers are the highest-paid in the nation. Its prison guards can easily earn six-figure salaries. State workers routinely retire at 55 with pensions higher than their base pay for most of their working life. Meanwhile, what was once the most prosperous state now suffers from an unemployment rate far steeper than the nation’s and a flood of firms and jobs escaping high taxes and stifling regulations. This toxic combination—high public-sector employee costs and sagging economic fortunes—has produced recurring budget crises in Sacramento and in virtually every municipality in the state.