My kind of Girl 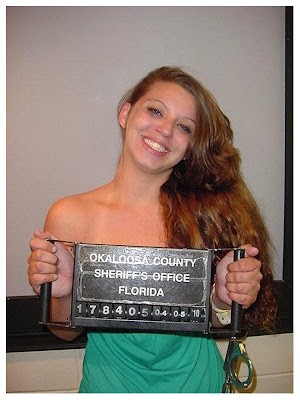 Police Car No Place For A Beer

APRIL 7--Meet Tasha Lee Cantrell. The 19-year-old Floridian was riding in a car early Monday morning when the vehicle's driver was pulled over and arrested for DUI. As a tow truck arrived to remove her friend's car, a stranded Cantrell asked Okaloosa County Sheriff's Office Deputy Mitchell Landis for a ride home to her Fort Walton Beach residence. Landis agreed, but only after checking Cantrell's purse for any contraband, according to an offense report. While chauffeuring Cantrell, Landis heard the teenager "open a can of some sort" in the back of the cruiser. "As I looked at my in car video I observed Cantrell drinking out of an unknown can." Landis stopped his car and, upon further investigation, determined that Cantrell had popped open a can of Steel Reserve, a malt liquor known for its high alcohol content. "When I opened the rear passenger door I observed Cantrell attempting to hide the can between her legs. I retrieved this can and noticed it was Steel Reserve Beer," reported Landis, who immediately arrested Cantrell for underage drinking. Instead of being shuttled to her doorstep, Cantrell, pictured in the below mug shot, was rerouted to the sheriff's office, where she was booked on the misdemeanor charge. (3 pages)