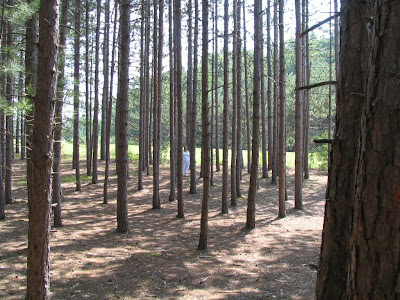 This picture above are trees planted by someone I knew. When I was a child, my grandfather worked for the Corps of Engineers in Franklin NH. I remember him planting seedlings in the fields. Fifty years later, walking through the forest, I thought: "This is odd. All the trees are exactly the same distance from each other". Then a smile crossed my face, I realized, Grandpa planted these.

I used this last year for the first time with success. I had forgotten about it until I came across this post. Got to find my Neti Pot;-)

From the blog: Ridiculously Extraordinary

How I Cured My Seasonal Allergies Forever

If you suffer from seasonal allergies (tree, grass, or weed pollen) then take note. What I’m sharing with you took me 14 years to learn and relieved me of allergy symptoms forever.

I began suffering from horrible seasonal allergies around the age of 13. You know what I’m talking about: constant sneezing, itchy eyes, itchy skin, and a general lethargic feeling.

This lasted a few months out of the year. As much I enjoyed Michigan’s Spring and Fall weather they were pretty dreadful at the same time.

To combat these symptoms I did exactly what most other people, and probably you, did.

I started downing over-the-counter Benadryls. They worked well for a few hours, but made my lethargy much more pronounced.

It was like I was a walking zombie. I would sleep during almost every class in school and could just barely make it through some days.

So I took the next “logical” step and went to see my Doctor.

What did he do?

Well, what do Doctors do?

Treat symptoms, not the root cause, and write prescriptions.

As an aside: If you have allergies of any kind or annoying medical problems (itching, for example) you can make an appointment with an Allergist to get a full round of allergy testing done. You will learn in just a few hours almost everything you’re allergic to (pollen, molds, dust mites, animal dander, insect stings, foods and some medicines). One of my mistakes was seeing my regular doctor instead of a specialist.

So, of course, my Doctor prescribed the advertising darling of the time: Claritin.

It didn’t work for me. At all.

It worked better than Claritin, but still not well enough to justify taking the pill every day.

Back to the Doctor for something “better.”

He prescribed Zyrtec, which at the time, I believe, was fairly new. The good Doc basically told me it was my last option.

And thankfully it worked better than anything else I’d tried.

I didn’t like the fact that I had to take a pill every day. But Zyrtec worked about as well as Benadryl for a longer amount of time and it didn’t make me drowsy.

Since it worked so well for the few months per year I needed it I stuck with Zyrtec for quite a few years.

Then at the age of 23 I moved to Florida and for whatever reason Zyrtec stopped working.

It was almost as if I was not taking allergy medicine. All my symptoms were back. Red, itchy eyes, itchy skin, constant sneezing and runny nose.

I have 2 explanations for this:

1) The pollen in Florida is stronger or more prevalent than the pollen I was used to in Michigan. (Yes, I know the pollen is different due to the different plants, grass, and trees, but that should hold no weight against the mighty Zyrtec, right?)

2) After years of using Zyrtec I became immune.

Whatever the problem I needed a solution.

By this time in my life I started to research symptoms, their causes, and alternative treatments on my own.

Which led me to Eastern medicine. I began an acupuncture and herbal treatment under the care of an Eastern medicine practitioner. (I’m not sure if they’re Doctors, per se.)

If you’ve never done acupuncture, or are afraid of needles, it doesn’t hurt. When the needles were inserted or twisted at certain points in my body I would get an interesting sensation. Either a full body jolt or a localized sensation at the point of contact.

But there was never any pain.

In addition to the acupuncture I was prescribed herbal pills. 3 times per day I was to swallow 3 pills. Hey, if it worked I was all for it.

But, you guessed it. It didn’t do a thing.

By this time I was at wit’s end.

My Eastern medicine “health practitioner” suggested I try local raw honey. If you’ve been to a health food store in your area you’ve probably seen this. It’s a thick liquid and looks almost dirty. :) That’s the honeycomb.

2 Tablespoons per day every day for a year. That means it was to be taken every single day even when I had no allergy symptoms. If it worked then I was to continue eating the honey daily.

I’m pretty good at delaying gratification so I gave it a shot. (I know honey isn’t vegan, but this was before going vegan.)

The reasoning behind taking raw honey with honeycombs is that it will have small amounts of local pollen (allergen) and with regular exposure your body will develop an immunity.

Either my immune system is a freak of nature or these alternative remedies just don’t work.

I’d just deal with the allergies and take Benadryl any time I simply couldn’t handle the symptoms.

I was back to square one, but I really didn’t think there were any other options.

Have you ever felt like that? Have you ever put a lot of energy into something only for it to pan out in an undesirable way?

I’m not a quitter, but the stress of not being able to find a solution was worse than dealing with the allergies. It just wasn’t worth it anymore.

But bear with me.

By this time in my life I stopped going to doctors altogether. In an emergency like the time I caught on fire? Sure, I’ll see a doctor. An illness (i.e. sinus infection) that will pass on its own? No way.

My Sister-In-Law told me about something that was supposed to help with sinus infections. She’d never tried it so she had no first hand experience, but I’m willing to give almost anything a shot.


No beating around the bush, a Neti pot is a basically a teapot full of salt water you stick into your nostrils to flush out all the mucus, pollen, and other debris out of your nasal passages. :)

To be clear, using the Neti you pour 4 ounces of salt water into one nostril and it flows out the other. Then you repeat with another 4 ounces in the other nostril.

After a few days my sinus infection was gone without seeing a doctor or taking any prescriptions.

You know when you have a cold and you can’t breathe through your nose?

The Neti pot clears it right up.

If your cold is severe the mucus will build back up pretty quickly. But regular use 2-3 times/day while sick (and especially when you just start feeling an illness coming) will kick your infection to the curb without medication.

After this great success I read more about nasal irrigation and its benefits.

Symptoms of seasonal allergies are caused by breathing in pollen, right?

When you breathe that pollen through your nose it just sits in your nasal passsages causing your misery!

It’s only logical that if you can remove the allergen from your system you won’t have symptoms, right?

How obvious and yet how illusive.

When the Spring 2008 allergy season rolled around I started using the Neti pot upon waking and then in the middle of the day (around 6-7 PM).

You probably already know the result, but I’ll state it anyway:

I haven’t had symptoms of seasonal allergies since then!

Continue reading if you have more interest in using a Neti pot. If not, no need to waste your time. :)

If you’re like me and hate your allergies or getting the annual cold here are a few more tips for using a Neti pot:

1) If you have a really stuffed up nose the regular Neti pot won’t build up enough pressure to push the salt water through your nasal passages. In that case you’ll need one of the plastic squeeze bottle-style nasal irrigators that push the salt water through with a little pressure. Don’t worry, it doesn’t hurt. It’s not like a high pressure hose, but more like a weak faucet.

2) Use either luke warm filtered water or boiled tap water cooled to luke warm. If you use boiling water you’re going to burn your nasal passages so be sure to let it cool. I speed the cooling process with ice cubes.

3) If your symptoms are really bad use the Neti upon waking, in the afternoon, and about an hour before bed.

4) For the most part I use premixed Neti salt packets, but you can also use 1/8 teaspoon of salt in 8 ounces of water and you’ll get the same effect. I use sea salt on the occasions that I do mix my own solution.

5) DO NOT use water without salt. It is very painful. Yes, I’ve tried it so you don’t have to.